Stevie Williams and The Most Wanted Band. A Greater Horror - Manchester Jazz Festival 2012

Saturday kicked off with some excellent blues and roots from Stevie Williams and the well honed Most Wanted Band.  Top stuff this was if you like a guitar solo or two, with consistently excellent playing from both Steve Buckley and Markie Creswell on said instrument. An authenticly down home swamp feel was perfected for a cover of Tom Waits 'Chocolate Jesus', Creswell somehow managing to get a lovely deep reverbed banjo sound from his electric guitar, with Buckley laying some suitably moody pedal steel slide over the top. The band have Zelig like skills, tapping into a range of vintage sounds, with 50s rock n'roll and bebop, 60s funk, and 70s laid back California folk rock all delivered with a knowing subtlety of the right sort. I especially loved the tight groove and grind of their excellent take on The Meters' 'Ride a Pony'. A standing ovation was received for a justifiably great set. I'll be checking them out again for sure. 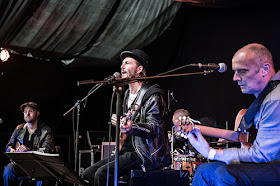 A Greater Horror get a 'challenging jazz' rating of around medium.  There were no hard edges as such, and indeed, Rodrigo Constanzo's always present Fender Rhodes sound frequently fired off comfortable Weather Report and Chick Corea neural paths for me.  Nevertheless, the arrangements were disorientating and rhythmically insistent. Constanzo was often sampling and looping himself, then playing over the top. This generally worked, but too often resulted in a rumbling harmonic density that obscured any movement and direction. The band were at their most effective on the good number of sparse track introductions, managing to convey an effective sense of threatening mysteriousness.  An upper range octavided solo from bass player Mauricio Pauly provided a welcome textural intrusion at one point, somewhat reminiscent of early King Crimson. There was plenty of interest here for sure, but it was a bit of a mixed bag. 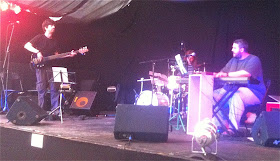